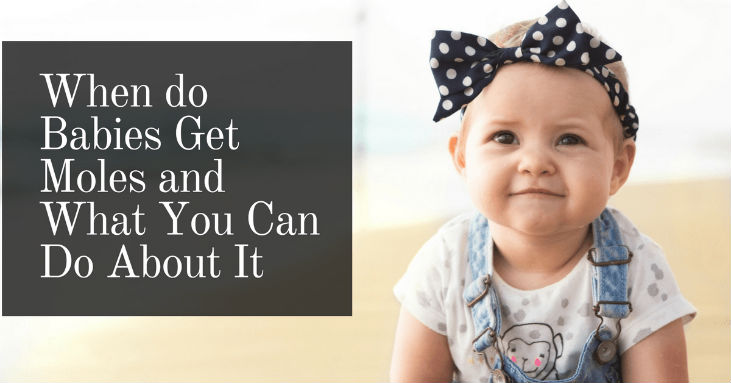 I was visiting a friend a few months ago because I wanted to see his cute baby boy. He is already one year old, and I only got to see him in the photos she sent me. When I held her little boy, I noticed that he had a mole on his left arm. I was surprised since he was only a baby and there was a small spot in his body.

My friend told me that it was nothing severe and she was not worried. When do babies get moles? Knowing when to expect it will give me an idea how to detect safe moles from unsafe ones.

In this post, you will learn more about moles and what you can do to prevent it

Moles – What Are They?

When you see spots on the skin ranging in color, shapes, and sizes, you are looking at a mole. It is a part of the skin where a group of cells is producing more melanin. Moles can vary between raised or flat, oval or round, hair or no hair and small or big. They also differ in colors like black, tan, pink or brown.

Moles can appear in any part of the skin. Some people may only have a few moles while others have dominant numbers of spots.

Benign moles are harmless moles with three features. It has a uniform pigment. There is a regular border around it, and it is symmetrical. Benign moles can get darker or lighter over time. There may be coarse hair growing in them or can become bigger as the skin stretches.

Other Types of Moles:

Dysplastic or Atypical Naevi – flat or bumpy and slightly bigger than the others. It has an unusual appearance and may be in different colors.

When Do Babies Get Moles?

Moles can be developed as children grow old or can be a birthmark mole called congenital mole. Some moles may already be present at birth and produced during fetal development while other moles appear before they turn 12 months. Some people even develop moles during their adult years. Moles will develop within the first 20 to 30 years of a person’s life.

The existence of moles has always been a cause of concern for many parents. In some cases, moles develop as a symptom of cancer of the skin called Melanoma. It starts with the melanocytes, pigment-producing cells that provide color to the skin, hair, and eyes, and turns into a mole.

However, it is important to note that melanoma is a rare case in moles. The prominent causes of skin melanoma are too much exposure to ultraviolet rays coming from various sources such as the sun and tanning beds.

Melanoma also hardly happens to young children hence there are lower chances of your baby getting skin cancer through his mole. Melanoma typically begins during the teen years and older. However, congenital moles are more at risk of melanoma.

The Dysplastic Naevi is also likely to develop melanoma. These moles are usually in irregular shapes and are larger than a typical pencil eraser. There are uneven parts of the moles such as lighter colors, dark brown centers, and irregular borders.

What to Watch Out in a Mole?

While moles may be regular spots on the skin, we should always check and watch out for signs that require medical attention. According to the American Academy of Dermatology, the ABCDs are ways on how to determine if moles are safe or not:

READ  When Can A Baby Sit In A Shopping Cart? Here Are Six Practical Things To Know

The American Academy of Dermatology notes that any changes in the moles sufficing the above criteria are an indication of a risky mole. You must seek medical attention for examination.

Tips on How to Prevent Moles

Keep your child indoors when the sun is at its highest. During the hot season, the sunrays are too hot between 10 in the morning and 3 in the afternoon. Do not allow your baby to stay outside during these times.

Apply sunscreen on the skin. There might be instances when you need to go out during the day so a sunscreen can add a layer of protection to your baby’s skin.

Use an umbrella to cover your child. You may also wear a wide-brimmed hat or a large soft towel to cover his skin from the sun.

Moles may appear on your baby as early as 0 months old. But, there is little chance that it is dangerous for your child.

Keep a watchful eye on the abnormal signs of the mole and always seek your doctor’s help if you have concerns. Detrimental skin conditions rarely happen, but it is best to detect them earlier and find a cure.

When my baby was born, I checked her body to see if any moles or spots are growing. My baby got her first mole when she was already two years old. Still, I continue to check it to see if there are unusual changes.

When did your baby first develop a mole? Share with us your story!

5 Benefits of Sending Your Child to a Boarding School

Camping With Your Kids: 4 Tips For Adventurous Parents