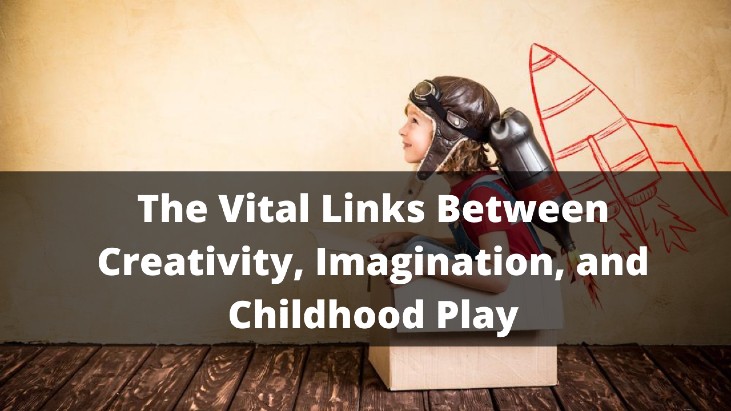 The Vital Links Between Creativity, Imagination, and Childhood Play

Creativity isn’t just important to artists. It’s the ability to come up with new ideas and develop novel solutions to complex problems. And creativity requires imagination - the ability to think “outside the box.” While we might be led to believe that creativity and imagination are something that some people are born with, they are qualities that we develop during our formative years.

You’ve probably seen it yourself: your toddler talking to cuddly toys, little ones on scooters making “vroom” noises as they zip around the garden. Imaginative play may just look cute to adults, but according to psychologists, it’s incredibly important. Play is the number one way in which children begin to develop several important qualities that are all based on the ability to use one’s imagination.

What the Experts Say About Imaginative Play

Play is so vital to our development that researches have undertaken a multitude of studies on its benefits. Apart from helping to develop our problem-solving abilities, play that involves using the imagination also stimulates the development of language skills. A team of researchers found that children who played “let’s pretend” games developed greater verbal sophistication than those who did not. So, apart from helping us to think creatively, play can also help us to express ourselves better. After all, what’s the use of a great idea if you can’t explain it?

But there’s more. Creativity should be a positive energy that helps other people. Play helps us to understand different scenarios and how other people experience them. Research conducted in 2006 showed that kids who play imaginative games have a better ability to “self-regulate” or control negative behaviors like aggression and have more empathy for others. Empathy is the ability to “walk a mile in someone else’s moccasins,” and it’s certainly a quality that requires imagination.

In 2012, a study of Nobel Prize winners found that winners were likely to have invented make-believe worlds when they were kids - more so than their less-creative peers.

How We Can Encourage Creative Play

It’s your child’s imagination, so how much it gets used is outside your control, but you can certainly encourage imaginative play. Once again, experts have been hard at work trying to uncover the ways in which parents can promote play that engages fantasy and role-playing.

READ  Why Do Babies Pull Their Hair? Know the Surprising Reasons

Kids Find a Way, but They Will Always Value Our Help

From the moment our children start to interact with the world around them, they begin to use their imaginations. They’ll do it even if we don’t create a conducive environment - I remember playing with the neighbor’s kids when I was a child. They had a strict, almost-Edwardian upbringing in which they were expected to be “little adults.” But they still found ways to use their imaginations to play. An empty matchbox became a “car,” an old hot-water bottle swathed in a blanket became a “doll.”

I remember feeling sorry for them because we had wonderful toys and a Mom who told us stories and interesting things about nature, science, and far-away countries. They, on the other hand, had to hide their “toys” and behave seriously whenever the adults were around. Sometimes, I find myself wondering how this affected them. Do they feel the need to hide their creativity to this day?

The bottom line? Kids will find a way to use their imaginations because it’s a natural and important part of their cognitive development. Fostering imagination isn’t just fun. It’s also one of the best ways to learn and grow. Sure, we won’t give in to things like a child’s desire for instant gratification, but we should be proud of our role in creating a relaxed environment in which our kids feel free to say things like: “I’m an airplane! Look, Mom!”
READ  Top 5 Best Crib Sheets: The Professional Tips On How To Get Buy The Best Products

Play Quiz Games with Kids to Improve Their Mind Health

5 Toys to Buy Your Kids for Endless Hours of Fun

Kids and Video Games: A Short Guide for Parents