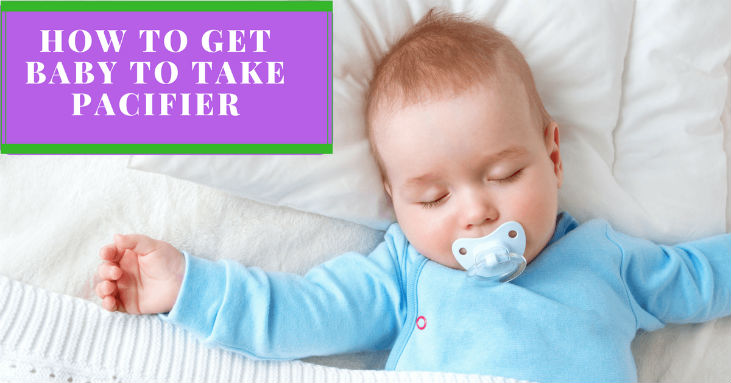 I find it kind of interesting that something as small as a pacifier has such a huge reputation. In fact, of all the stuff that has been invented for babies, nothing has been surrounded by controversies more than this tiny object. Some circles say it’s bad for your baby, while others say it’s just okay for an infant to use one.

Here at The Impressive Kids, we’ve also shared our stand regarding the use of pacifiers, but in this post, we’ll talk about a very important subject, and that is how to get baby to take pacifier.

How To Get Baby To Take Pacifier (Plus Top Reasons He’s Refusing It)
Possible Reasons Your Baby Is Saying No To The Pacifier Pros and Cons of Using A Pacifier PROS CONS A 5-Step Method To Teach Your Child To Take A Pacifier Step 1: Pick the right pacifierStep 2: Introduce the pacifier as part of playtimeStep 3: Let your child suck the pacifier for a few minutes Step 4: Use reverse psychology Step 5: Wait several days to try againFinal Tips

Possible Reasons Your Baby Is Saying No To The Pacifier

One of the things that can really frustrate us parents is when our baby won’t take the pacifier. No matter how hard we try and regardless of what technique we use, our little one simply won’t budge. There are several reasons a baby won’t take a pacifier. Let’s explore some of them:

You’re offering it too frequently. It’s obvious - nobody wants to suck on a pacifier 24 hours a day. I know that’s kind of exaggerated, but you get the point. If you keep on offering a pacifier to your child even when he doesn’t really need it, he will say no to it. Unfortunately, a lot of parents offer the pacifier for the wrong cues.

Babies cry when they are hungry, tired, colicky, or need their diapers changed. Sometimes, they also complain when it’s too hot or too cold, or when they merely want to play and bond with their parents.

If you offer a pacifier all the time, the child might take a few sucks, but he’ll later on realize that it doesn’t solve whatever is causing him to be fussy. As a result, he’ll learn that a pacifier doesn’t always work and he may refuse it more often.

You’re offering the wrong pacifier. Newborns can be very picky, and they know what they want and need. If they’ve gotten used to a certain brand of pacifier, they may not take in anything other than what they’ve been used to.

Also, the size and the shape of the binky matters. This is particularly the case when you’re introducing one to your child for the first time. If the pacifier is too big or is not the correct shape for his mouth, he might refuse it. In such a case, it’s important that you understand what the best pacifiers to choose from.

You did not introduce it to him the first few weeks of his life. The first few weeks of your child is crucial. It’s the period that he bonds with you and studies your features. The third week is where you’ll find the pacifier to be of huge help in calming him down when he’s fussy or colicky.

READ  Top 5 Best Baby Bottles – So What Do Moms Use Nowadays?

Your child doesn’t need it at the moment. Just because he’s refusing it now doesn’t mean he’s rejecting it forever. Perhaps there’s something else he needs and is not in the mood for a pacifier at the moment. Put it away for a while and try offering it to him at another time.

Your child simply doesn’t want it. Period. Some babies will gladly accept a pacifier, but some just won’t. If you did everything you could and he still wouldn’t take one, move on and accept the fact that he doesn’t want a binky inside his mouth.

Here’s baby Eva showing you how to refuse a pacifier:

Pros and Cons of Using A Pacifier

The decision to let your child use a pacifier or not depends on you. Do what your parental instincts tell you and there’s very little chance that you’d go wrong. However, you also have to realize that there are pros and cons to using pacifiers. It’s important to know what they are before making a decision to avoid having regrets later on.

It may calm a fussy baby. This one’s very basic. Sucking is natural to newborns. It’s their primitive reflex. They love to suck for various reasons, but the most common one is that it gives them a sense of comfort. A pacifier is a great way to calm a crying baby because it encourages him to engage in an activity that he normally and naturally loves - suckling. 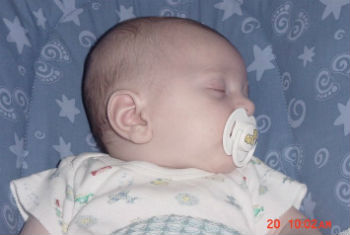 It can serve as a distraction. Since suckling offers a sense of comfort, sticking a pacifier into your baby’s mouth when let’s say: "He’s having a vaccine", may help him forget the discomfort brought about by the medical procedure.

It may cut your child’s risk of SIDS. Several studies have already been made about the correlation between the use of pacifiers and the reduction of the risk of SIDS. Here is one such report.

It may increase your child’s risk for otitis media. Otitis media or middle ear infection is one of the possible effects of using pacifiers. While pacifier use doesn’t directly cause the infection, it does contribute to a child’s susceptibility to it.

To prevent or at least lower the chances of your child experiencing the ill effects of using a pacifier, the key is to let him use it sparingly. This means you should only offer one to him when he’s falling asleep or when it’s the last resort for comforting him. Discontinuing the use of a pacifier on your child’s tenth month will also help. 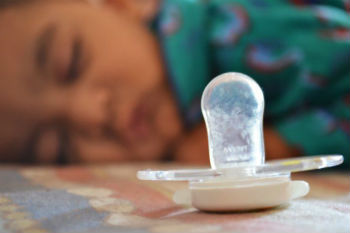 The first step to teaching your child to take in a pacifier is to find the right one that’s appropriate for his stage of development. No matter how fancy looking or expensive the paci you’re offering, if it’s not appropriate for his age, there will be very little chance he’s going to accept it. Most brands have a rating indicated on their packaging.

It usually indicates what the nipple size, shape, and material are and whether it’s appropriate for a newborn or a several-month old child. A good pacifier should have a thin neck, a scooped bottom, and curved top so that it could fit snugly into your little child’s mouth.

Step 2: Introduce the pacifier as part of playtime

Consider offering the pacifier when your child is in a good mood, most preferably when he’s in the mood to play. Waiting until he’s upset and already crying hard may not be a good idea. It may even add to his fussiness rather than pacify him. When giving the paci, try to touch his cheek with it. His natural reflex when you do this is to turn towards the pacifier and suckle.

Nope, not this pacifier-in-cheek kind of thing:

Step 3: Let your child suck the pacifier for a few minutes

Once he’s started sucking on the binky, let him alone for a few moments. If he spits it out after a few attempts, try dipping it in formula or breastmilk and see if we would take it this time.

This should only be performed if your baby tries to refuse the binky. As soon as you child starts sucking, pretend to take it away. Your baby’s reflex will be at work with this one, causing him to suck harder. Try this technique right after feedings, when your child is already full but is still in a sucking mood.

READ  Grandparent & Grandchild Relationships | How to Foster It

It may take a day or two before he finds the pacifier satisfying and will start to take it without hesitation.

If any of the methods you’ve tried didn’t work, take a break and wait for several days before attempting to offer the pacifier again. Perhaps your child is simply not yet ready at this moment. Most experts recommend that you wait until your little one is a month old until you introduce the binky, especially if you’re planning to breastfeed him.

To encourage your child to take a pacifier, hold him as if you’re going to feed him. Tuck his arms into his sides and place his hands in front of his chest. Next, tuck up his knees, allowing his feet to rest on your elbows.

Doing this will put him in a flexed position and help prepare him to suck. You can then dip the pacifier into formula or breast milk and touch your child’s lower lip with it. This will trigger your baby’s rooting reflex and cause him to open his mouth.

Once he’s opened his mouth, you can gently insert the pacifier and stroke it down the center groove of his tongue. If you’re lucky, he’s going to hug the nipple with his tongue and lips and suck on it with gusto.

As mentioned earlier, newborns can easily become accustomed to a certain style of pacifier and will reject all other styles. For this reason, always have several of his favorite pacifiers on hand in case the one he’s using gets lost or needs to be cleaned.

Moreover, don’t be afraid to try different brands. Pacifiers are not too expensive, and if you want the benefits that come with it, you’ll learn later on that it’s worth the trial and error.

Keep in mind, too that your baby is unique and will meet milestones at his own pace. If he refuses the pacifier at the moment, it could be only for a season, and he might develop a liking for it later on.

In the same manner, you have to understand that your child might not take a pacifier ever. Don’t be frustrated when this happens. In fact, you should be happy that he won’t have to experience the drawbacks of using a pacifier as described in this article.

Did you find this post helpful? If you did, please don’t forget to share it. And if you have additional tips you’d like to share with us, drop them in the comments section. We’d be glad to hear from you. Thanks!