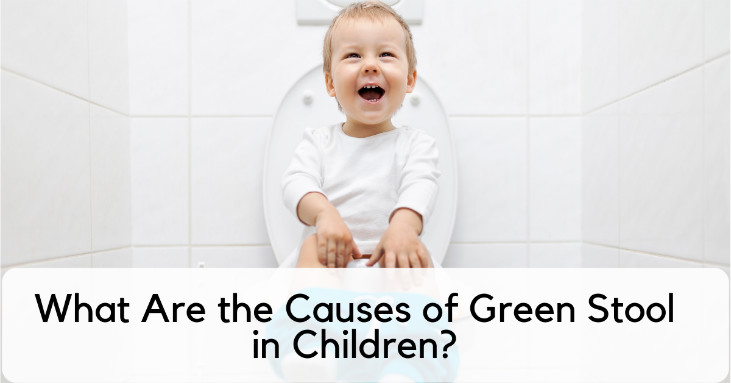 What Are the Causes of Green Stool in Children?

It’s normal to keep track of your child’s bowel movements and to take note of changes to color, quantity, and texture. Most doctors advise it as a way to monitor the overall health of your child. However, discovering green stool in children can be a shock, especially if you’re a first-time parent. In this post, we will lay down the possible causes of green poop in children and help you decide whether it’s time to see the doctor or not.

Seeing your newborn passing green poop once in a while is not unusual, whether the child is breastfed or not. If the baby is breastfed, one of the first few factors to look at is the mother’s diet. Keep in mind that whatever food you take in will have a direct impact on the quality of your breastmilk.

If you’re constantly snacking on food with green coloring, this will have an effect on your breastmilk, which in turn, may result in green poop in your baby. The same is true when you are having a high intake of vegetables like cabbage or broccoli, as well as other green vegetables. It’s also not uncommon for a breastfed infant’s poop to turn green if they are allergic to something in your diet.

Oddly enough, eating food with blue or purple coloring may also result in your baby having green stool. To properly evaluate whether it’s your own diet that’s causing your child to have green poop or not, limit your intake of green foods and foods with artificial coloring for three days to a week.

READ  So When Can Babies Have Pineapple? Find Out More Here

If your child is currently taking some form of medication or dietary supplement, there may be a chance that either of these is causing the change in stool color. Iron supplements, in particular, are considered a common cause of green poop.

Supplements that contain fructose and sorbitol may produce the same results, too. If your child is under antibiotics, it may also be the reason, since antibiotic use can cause bacteria present in the gut to become more aggressive, resulting in a green stool.

In some occasions, a breastfed infant may receive an oversupply of breastmilk and may be receiving more foremilk than hindmilk. Since foremilk is lower in fat content and higher in lactose, there’s a chance that your baby may not be able to digest it properly. As a result, it won’t have time to transition from green to brown or green to yellow. This also leads to poop that is watery or frothy.

Diarrhea is one of those cases wherein your child may produce bright green stools. Food may be moving too quickly through the large intestines, and as a result, bile produced by the digestive system won’t have enough time to break it down completely. In such a case, there’s usually no reason to worry.

Just as breastfed infants may have occurrences of green poop, so do babies who are fed with formula milk. A particular study done to evaluate the effect of protein and iron content in formula milk on stool characteristics found that infants who received whey-predominant formula milk that contained 12mg/L of iron primarily produced green stool.

The result was the same for infants who received casein-predominant and iron-fortified formula milk. The study concluded that green stool, in the absence of disease, should be considered normal.

Green Stool In Toddlers and Children

When dealing with toddlers and children, there’s a lesser reason to worry when seeing green stool. In most cases, there are only two major reasons that it happens: diet and iron supplements.

Children who receive a diet rich in either artificial or natural colors may sometimes produce green poop. Leafy greens such as spinach and kale, pistachios, blueberries, seaweed, algae, wheatgrass, and spirulina are all high in chlorophyll and may cause stool color to turn to green.

If your child is taking iron supplements, his stool is almost always green or black. This is a result of unabsorbed iron, which is considered a harmless side effect.

The only other time your toddler or child’s poop may turn green is when he has diarrhea, in which case, solving the diarrhea issue will cause the stool color to return to normal.

When Should I See The Doctor?

Green poop is almost always not something you should worry about. More often than not, it just means your child’s stool passed through the intestines too quickly and his body did not have enough time to absorb back the excess bile. There is also no need to worry if your child is gaining weight just fine and is eating normally.

However, that doesn’t mean you should ignore the symptom altogether. If your child’s green poop persists even after two to three days, speak to your doctor as soon as possible. It’s also time to see the doctor when you see these symptoms:

It’s especially important to pay attention to dehydration if the green stool is a result of diarrhea. Children with diarrhea should be monitored very carefully as they are often at a dangerous risk and may require medical attention immediately.

Finally, please keep in mind that the causes we have included here are usually associated with the symptom. If you want an accurate diagnosis, do not think twice to visit and work with your child’s health care provider.

What Makes a Great Childcare? 6 Things to Look Out for

The Ultimate Guide to Treating Tooth Decay in Children