Can Babies Have Maple Syrup? You’ll be Surprise With the Right Answer

Imagine the rich, thick and silky spread of maple syrup on top of your hot pancakes. My family loved to gobble on stacks of banana pancakes poured with butter and syrup. If there is a list of our favorite family foods, maple syrup pancakes will be on our top 5.

One morning when we were eating breakfast, I suddenly had the urge to add some maple syrup to my baby’s food. I thought that if we enjoyed maple syrup so much, our baby could have it in her early years.

Then, I realized that my pediatrician had warned me not to feed my baby with foods that may not go well with her tummy. So, I was wondering, “Can babies have maple syrup?” I search for information about maple syrup and its effects on infants, and I will share them with you on this post.

Can Babies Have Maple Syrup? You’ll be Surprise With the Right Answer
What is a Maple Syrup?Common Uses of Maple Syrup Health Benefits of Maple SyrupIs Maple Syrup Good for the Baby?Some of the symptoms involving Infant Botulism include:
Other Foods To Avoid Giving Babies Under 1-Year-Old
Keep it safe!

What is a Maple Syrup? 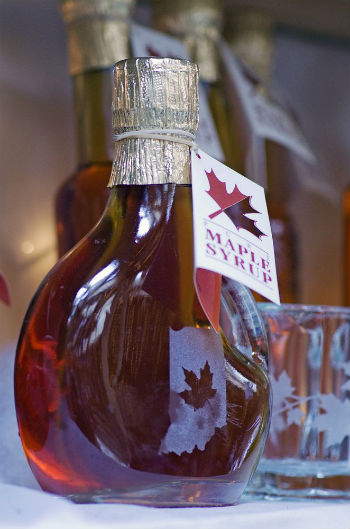 Maple syrup is a sweet and sugary fluid made out of the sap of maple trees. The process of making maple syrup is involved in two ways. First, the maple tree is drilled to let the circulating fluid leak out and collected. Second, the liquid is boiled until the water has evaporated, leaving only a thick syrup. It is then filtered of any impurities.

There are different kinds of maple syrup, usually differentiating in color. Darker maple syrups, or Grade B, have the strongest flavors since these were extracted later during harvest. Grade A consists of lighter colors such as Light Amber, Medium Amber, and Dark Amber.

READ  When Can Baby Eat Rice? Here’s the Astounding Truth

You can find maple syrup as a common cooking ingredient for different foods. The dark liquids are used for baking and cooking due to its flavor enhancement. Maple syrup can be utilized as a sweetener to bread, cakes, and flavored drinks.

Grade A syrups are used as toppings on foods like pancakes, French toasts, and waffles. You can also use maple syrup to add flavor to your ice cream, fruits, and even sausages.

One of the good things about maple syrup is its mineral and antioxidant content. A hundred grams of maple syrup contains 28% Zinc and 165% Manganese of the RDA. Zinc and Manganese are known to help ward off illnesses and increase your resistance to sickness.

A study shows that maple syrup contains 24 different substances of antioxidants. There are antioxidants known to fight aging and reduce the growth of cancer cells in the body.

Is Maple Syrup Good for the Baby?

One of the foods that most doctors would not recommend to a child is honey. It is a potential source of the bacterium called Clostridium Botulinum. Honey is similar to maple syrup, which means that the latter can also contain the same bacteria.

When honey and maple syrup contains the bacteria, it can lead to a detrimental condition called Infant Botulism. It is a rare but severe disease that can attack the nervous system and cause paralysis to the body or muscle weakening.

Some of the symptoms involving Infant Botulism include:

READ  When Can Babies Eat Cheerios? Here are the Sure Facts You Need to Know

It is important to take note that Infant Botulism happens only to babies. The said disease does not affect bigger kids and adults. Adults have more mature intestines, which contain enough acids to combat the production of toxins that the bacteria may produce in the body.

Kids who are one year and older also have more balanced acids in their intestines that can counteract the toxins. That is why, most pediatricians would recommend avoiding honey, maple syrup, corn syrup and other fluid sweeteners in babies until they reach one year old.

Other Foods To Avoid Giving Babies Under 1-Year-Old

We all want our children to enjoy whatever good things there are in life. We want them to eat good and delicious foods. However, when it comes to food, better health always prevails! It is crucial for us to consider safe foods for our babies than giving them food for tasty reasons only.

I also wanted my baby to eat all the yummy foods we have on our table. After realizing the risk that some foods can give my child, I would rather wait for the right time to introduce them to her. Maple syrup is a staple on our breakfast table. But my baby will wait until she is old enough to enjoy as much maple syrup as she wants.

Have you given your baby some maple syrup? What happened? Tell me more!

Want to Know the Right Time When do Babies Hair Change Color?

So, Can Babies Have Seizure in the Womb? And Know To Panic

What Age Do You Stop Burping Babies? We Found The Best Answers Right Here.

i am not sure what research materials you used that indicated that maple syrup contained the bacteria causing botulism. Since maple syrup is boiled thoroughly to reach the state we find it. Please share these research findings if you have. All research points to corn syrup and honey. Journal of food protection has some papers on this subject.